By the Stop the Debt Trap Alliance of Oregon, in partnership with the Center for Responsible Lending (CRL) 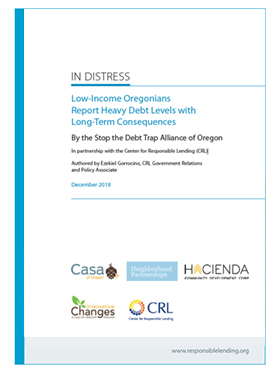 In 2006, when Oregonians noticed the devastating impact payday and car-title lending was having on their communities, a coalition pushed for a change in the state laws, bringing new consumer protections to hundreds of thousands of people in the state. This example shows the power of communities to make change on issues affecting the day-to-day lives of people in Oregon. Today, community organizations are once again coming together to continue improving the marketplace and economic security for working families in the state.

Through the newly formed Stop the Debt Trap Alliance of Oregon, and as part of the efforts to dig deeper into the debt burden experiences of low-income Oregonians, a number of nonprofit organizations developed a survey to be used as part of their intake processes. The survey was distributed in the spring and summer of 2018 with the goal of understanding what debts low-income families were facing, what had triggered that debt, and how these families were managing their debt loads.

After reviewing over 400 responses from individuals in over 100 different Oregon zip codes collected by 10 different social services organizations, the results were startling: low-income Oregon families are carrying various debts that have long-lasting implications in many aspects of their lives. From medical and utilities debt, to payday loans and student loans, all of these debts can lead to debt collection and credit reporting and are holding families back from successfully building wealth and achieving a life of financial security.

Key Findings of the Survey Include